Goa is synonymous to 'Beach' and 'Booze' for a majority of tourists. The beaches of Goa are highly visited and are thronged by the tourists almost throughout the year. But there are small clusters of Goa that remain unexplored and rarely visited. These areas, though being in the vicinity of most-visited places of Goa, have managed to remain isolated and keep a distance from crowds even in this era of commercialization. Located just 9 kilometres from Panjim (that is swarmed by hundreds of tourists each day), is Divar Island that is still uninfluenced and unscathed by tourism. In our desire to see and experience the hidden whereabouts of Goa, Divar Island was amongst one of the top places to visit. Read on to know more about our visit to this sleepy yet picturesque, serene and peaceful island.

Divar Island - One of the offbeat destinations in Goa

Read other blogs of the series ‘Offbeat Goa’ by clicking on the link or photos below:

Stay at Dudhsagar Plantation and Farmstay – A review

Hidden Gems of Veling – A walk with Soul Travelling

Places to visit in Panjim

Divar Island and its villages: According to one legend, the name 'Divar' is derived from 'Devallem' or 'Devola', meaning Hindu temples. Another says that it comes from 'Dipavatti' meaning a village (vatti) of lights (dipa). Yet, another version maintains that the name comes from 'Devipavatti', a place (vatti) surrounded by many islands (devippa). Initially, there were 3 villages in Divar: Piedade, Malar and Naroa. The Piedade village was later subdivided into two namely Goltim and Navelim.

The inhabitants of Divar Island were mainly of Konkani descent. It is believed that Divar Island was once a very popular site of Hindu pilgrimage and housed temples of Shree Saptkoteshwar, Shree Ganesh, Shree Mahamaya and Shree Dwarkeshwar. Its very name 'Divar' indicates of it being a centre of pilgrimage in the Konkan area. These temples were destroyed by the Portuguese in the year 1540 during religious persecution. The idols of a few temples were shifted to other locations. The Inquisition and the plaque that broke out years ago led to the abandonment of the Divar Island resulting in it falling into ruins.

1. Terminal at the south-east side connects Divar Island to Old Goa. It is also known as Piedade/ Goltim ferry terminal

Even the Konkan railway line passes through Divar Island without any station located on the island. Hence, even the islanders have to catch trains from the mainland; the nearest station being at Carambolim.

No bridge or direct motorable road links the island to the mainland. Many islanders feel that this very handicap is a blessing in disguise, as it has helped Divar maintain, to a large extent, its traditional Goan ambience and culture.

Ferry timings and Ferry charges to Divar Island, Goa: The timings of the ferry terminals connecting Divar Island to the mainland Goa are as follows:

The ferries run at an interval of every 30 minutes. There is no ferry charge or ticket for passengers and two-wheelers. However, for every four-wheeler, one has to pay INR 10.

Things to do OR Places to visit in Divar Island, Goa: 1. Our Lady of Compassion OR Our Lady of Piety Church, Piedade on Divar Island This church is located on a hilltop in Piedade village of Divar Island. It is believed that the church is located at the site of an ancient Hindu temple which was destroyed by the Muslim invaders in the 15th century. Our Lady of Piety church was then built at the site in 1700. The church was the first Christian structure erected in Divar Island and was designed by a Goan priest. It has an impressive white facade with lots of empty space in the front to sit and relax. The church bell has an interesting history- the original bell of the church caused glasses to break when it rang, hence it was exchanged for the bell of Se Cathedral located in Velha, Goa. Its location provides a panoramic view of the entire Divar Island and is best visited early morning or in the evening. Very fewer tourists happen to visit the church, therefore one can get the whole place to themselves with a lot of peace.

Panoramic view of Divar Island from the Church of Our Lady of Compassion, Goa
{"items":["9b64ce_c1106a3186f64e16b357e7b2eabbb948~mv2.jpg","9b64ce_9258c4a5b86e47429904099798e60142~mv2.jpg"],"styles":{"groupSize":1,"showArrows":false,"cubeImages":false,"cubeType":"fill","cubeRatio":1,"isVertical":false,"gallerySize":"300","collageDensity":0.8,"groupTypes":"1","oneRow":false,"imageMargin":10,"galleryMargin":0,"floatingImages":0,"chooseBestGroup":true,"smartCrop":false,"hasThumbnails":false,"enableScroll":true,"isGrid":false,"isSlider":false,"isColumns":false,"isSlideshow":false,"cropOnlyFill":false,"fixedColumns":0,"enableInfiniteScroll":true,"isRTL":false,"minItemSize":120,"rotatingGroupTypes":"","rotatingCubeRatio":"","gallerySliderImageRatio":1.7777777777777777,"numberOfImagesPerRow":0,"numberOfImagesPerCol":1,"groupsPerStrip":0,"borderRadius":0,"boxShadow":0,"gridStyle":0,"mobilePanorama":false,"placeGroupsLtr":false,"viewMode":"preview","thumbnailSpacings":0,"galleryThumbnailsAlignment":"none","isMasonry":true,"isAutoSlideshow":false,"slideshowLoop":false,"autoSlideshowInterval":4,"useCustomButton":false,"bottomInfoHeight":0,"titlePlacement":"SHOW_ON_HOVER","galleryHorizontalAlign":"center","galleryTextAlign":"center","galleryVerticalAlign":"center","scrollSnap":false,"itemClick":"link","fullscreen":false,"allowSocial":false,"allowDownload":false,"allowTitle":true,"allowDescription":false,"loveButton":false,"loveCounter":false,"videoPlay":"onClick","scrollAnimation":"NO_EFFECT","scrollDirection":0,"overlayAnimation":"NO_EFFECT","arrowsPosition":0,"arrowsSize":23,"watermarkOpacity":40,"watermarkSize":40,"useWatermark":true,"watermarkDock":{"top":"auto","left":"auto","right":0,"bottom":0,"transform":"translate3d(0,0,0)"},"loadMoreAmount":"all","defaultShowInfoExpand":1,"allowTitleExpand":true,"allowDescriptionExpand":true,"allowLinkExpand":true,"expandInfoPosition":0,"allowFullscreenExpand":true,"fullscreenLoop":false,"galleryAlignExpand":"left","addToCartBorderWidth":1,"addToCartButtonText":"","slideshowInfoSize":200,"playButtonForAutoSlideShow":false,"allowSlideshowCounter":false,"hoveringBehaviour":"APPEARS","thumbnailSize":120,"magicLayoutSeed":1,"imageHoverAnimation":"NO_EFFECT","calculateTextBoxHeightMode":"AUTOMATIC","calculateTextBoxWidthMode":"PERCENT","textBoxHeight":0,"textBoxWidth":200,"textBoxWidthPercent":50,"textImageSpace":10,"textBoxBorderRadius":0,"textBoxBorderWidth":0,"textsVerticalPadding":0,"textsHorizontalPadding":0,"titleDescriptionSpace":6,"customButtonText":"","customButtonBorderWidth":1,"customButtonBorderRadius":0,"loadMoreButtonText":"","loadMoreButtonBorderWidth":1,"loadMoreButtonBorderRadius":0,"imageInfoType":"NO_BACKGROUND","itemBorderWidth":0,"itemBorderRadius":0,"itemEnableShadow":false,"itemShadowBlur":20,"itemShadowDirection":135,"itemShadowSize":10,"imageLoadingMode":"BLUR","expandAnimation":"NO_EFFECT","imageQuality":90,"usmToggle":false,"usm_a":0,"usm_r":0,"usm_t":0,"videoSound":false,"videoSpeed":"1","videoLoop":true,"galleryLayout":1,"gallerySizeType":"px","gallerySizePx":"300","allowHover":true,"mobileSwipeAnimation":"NO_EFFECT","gotStyleParams":true,"showVideoPlayButton":true,"selectedLayout":"1|none|1|fill|false|0|true","layoutsVersion":2,"selectedLayoutV2":1,"isSlideshowFont":false,"externalInfoHeight":0,"externalInfoWidth":0},"container":{"galleryWidth":2580,"galleryHeight":1440,"scrollBase":0,"height":null,"width":null}}

Towards the south of the church is a cemetery which is believed to be the resting place for the rulers of grand Kadamba dynasty. A small chapel in the cemetery was once an ancient Ganesha temple believed to have been destroyed by the Portuguese. The deity of the temple was later shifted to a new temple in Candola.

The cemetery nar the church of Our Lady of Compassion
{"items":["9b64ce_ef75317a96a047599138fb5fdd772f1e~mv2.jpg","9b64ce_b340120502264ac98975b77b7af68524~mv2.jpg"],"styles":{"groupSize":1,"showArrows":false,"cubeImages":false,"cubeType":"fill","cubeRatio":1,"isVertical":false,"gallerySize":"300","collageDensity":0.8,"groupTypes":"1","oneRow":false,"imageMargin":10,"galleryMargin":0,"floatingImages":0,"chooseBestGroup":true,"smartCrop":false,"hasThumbnails":false,"enableScroll":true,"isGrid":false,"isSlider":false,"isColumns":false,"isSlideshow":false,"cropOnlyFill":false,"fixedColumns":0,"enableInfiniteScroll":true,"isRTL":false,"minItemSize":120,"rotatingGroupTypes":"","rotatingCubeRatio":"","gallerySliderImageRatio":1.7777777777777777,"numberOfImagesPerRow":0,"numberOfImagesPerCol":1,"groupsPerStrip":0,"borderRadius":0,"boxShadow":0,"gridStyle":0,"mobilePanorama":false,"placeGroupsLtr":false,"viewMode":"preview","thumbnailSpacings":0,"galleryThumbnailsAlignment":"none","isMasonry":true,"isAutoSlideshow":false,"slideshowLoop":false,"autoSlideshowInterval":4,"useCustomButton":false,"bottomInfoHeight":0,"titlePlacement":"SHOW_ON_HOVER","galleryHorizontalAlign":"center","galleryTextAlign":"center","galleryVerticalAlign":"center","scrollSnap":false,"itemClick":"link","fullscreen":false,"allowSocial":false,"allowDownload":false,"allowTitle":true,"allowDescription":false,"loveButton":false,"loveCounter":false,"videoPlay":"onClick","scrollAnimation":"NO_EFFECT","scrollDirection":0,"overlayAnimation":"NO_EFFECT","arrowsPosition":0,"arrowsSize":23,"watermarkOpacity":40,"watermarkSize":40,"useWatermark":true,"watermarkDock":{"top":"auto","left":"auto","right":0,"bottom":0,"transform":"translate3d(0,0,0)"},"loadMoreAmount":"all","defaultShowInfoExpand":1,"allowTitleExpand":true,"allowDescriptionExpand":true,"allowLinkExpand":true,"expandInfoPosition":0,"allowFullscreenExpand":true,"fullscreenLoop":false,"galleryAlignExpand":"left","addToCartBorderWidth":1,"addToCartButtonText":"","slideshowInfoSize":200,"playButtonForAutoSlideShow":false,"allowSlideshowCounter":false,"hoveringBehaviour":"APPEARS","thumbnailSize":120,"magicLayoutSeed":1,"imageHoverAnimation":"NO_EFFECT","calculateTextBoxHeightMode":"AUTOMATIC","calculateTextBoxWidthMode":"PERCENT","textBoxHeight":0,"textBoxWidth":200,"textBoxWidthPercent":50,"textImageSpace":10,"textBoxBorderRadius":0,"textBoxBorderWidth":0,"textsVerticalPadding":0,"textsHorizontalPadding":0,"titleDescriptionSpace":6,"customButtonText":"","customButtonBorderWidth":1,"customButtonBorderRadius":0,"loadMoreButtonText":"","loadMoreButtonBorderWidth":1,"loadMoreButtonBorderRadius":0,"imageInfoType":"NO_BACKGROUND","itemBorderWidth":0,"itemBorderRadius":0,"itemEnableShadow":false,"itemShadowBlur":20,"itemShadowDirection":135,"itemShadowSize":10,"imageLoadingMode":"BLUR","expandAnimation":"NO_EFFECT","imageQuality":90,"usmToggle":false,"usm_a":0,"usm_r":0,"usm_t":0,"videoSound":false,"videoSpeed":"1","videoLoop":true,"galleryLayout":1,"gallerySizeType":"px","gallerySizePx":"300","allowHover":true,"mobileSwipeAnimation":"NO_EFFECT","gotStyleParams":true,"showVideoPlayButton":true,"selectedLayout":"1|none|1|fill|false|0|true","layoutsVersion":2,"selectedLayoutV2":1,"isSlideshowFont":false,"externalInfoHeight":0,"externalInfoWidth":0},"container":{"galleryWidth":2580,"galleryHeight":1440,"scrollBase":0,"height":null,"width":null}}

2. Saint Mathias Church, Malar on Divar Island The church is named after the Apostle of Jesus, Mathias. It was built between 1591 and 1597 when Dom Mathias de Albuquerque was the Governor of Goa. The church has eight altars. The main altar is dedicated to St. Mathias - the Patron of the Parish. The architecture of the church is beautiful with a white and blue exterior facade. There is ground right in front of the church where one can relax in peace. Saint Mathias church has calm surroundings and hardly any tourist visits it. The church is a part of the annual Bonderam festival in Divar Island.

4. Visit the neighbouring Vanxim Island Vanxim Island is still a smaller island located just a 5-minute ferry ride from Divar Island. The ferries to Vanxim Island start from the Amboi ferry terminal at Divar Island. Not measuring more than a few square kilometres, Vanxim Island is home to less than 500 people. The locals are mainly into farming and fishing. Hindus and Christians live in harmony on this beautiful island. The places to visit are the Church of Santo Christo and the Chapel of the Miraculous Cross which is believed to fulfil all your wishes. There are no shops, no schools, no clinics/hospitals on the island and it has stayed away from modernization for years. Owing to this, there is a lot of peace and tranquillity on the island that breathes nature and purity. The locals are ever smiling, welcoming and invite you to their house to have a chat.

5. Explore the Divar island on a two-wheeler or walk around the Old Portuguese houses The condition of roads in Divar Island is good. Though narrow, the roads are surrounded by vast green agricultural fields, mostly paddy. Oddly 2000 people are residents of the island currently. The locals are welcoming and go about doing their daily chores without being bothered. They try to keep their traditional culture alive and their style of living hasn't been much affected by modernization. Divar Island is basically a Goan countryside with lots of Portuguese influence in its architecture. Plenty Portuguese villas can be seen dotting the island, some well maintained and some in a dilapidated condition. Many dignified families of Goa have residencies in Divar Island who visit the island annually. 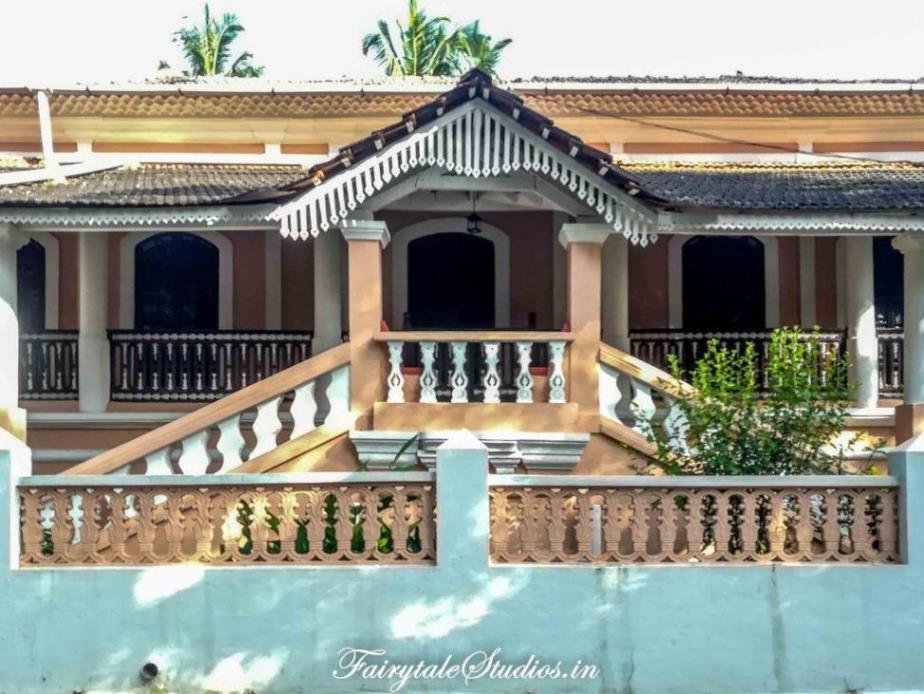 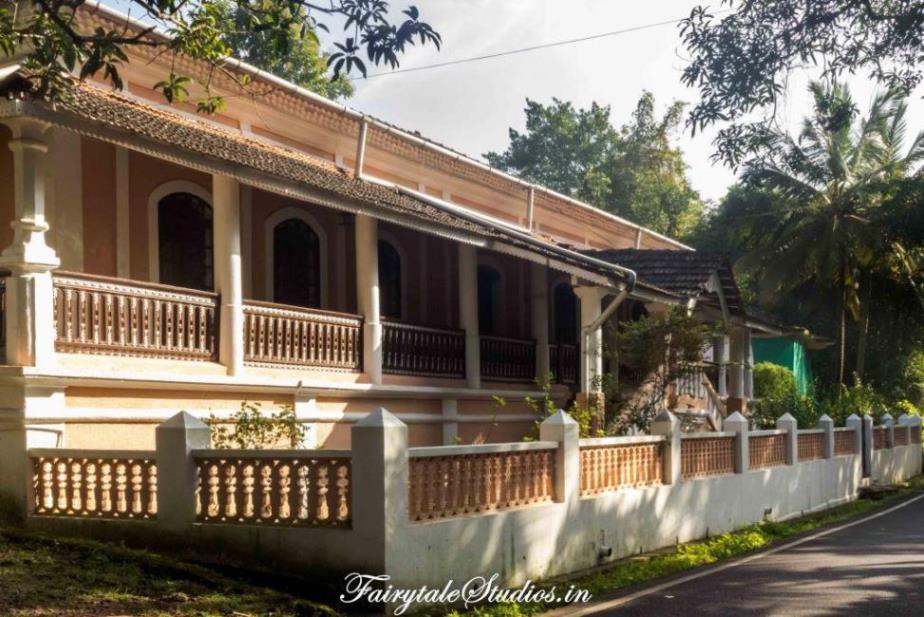 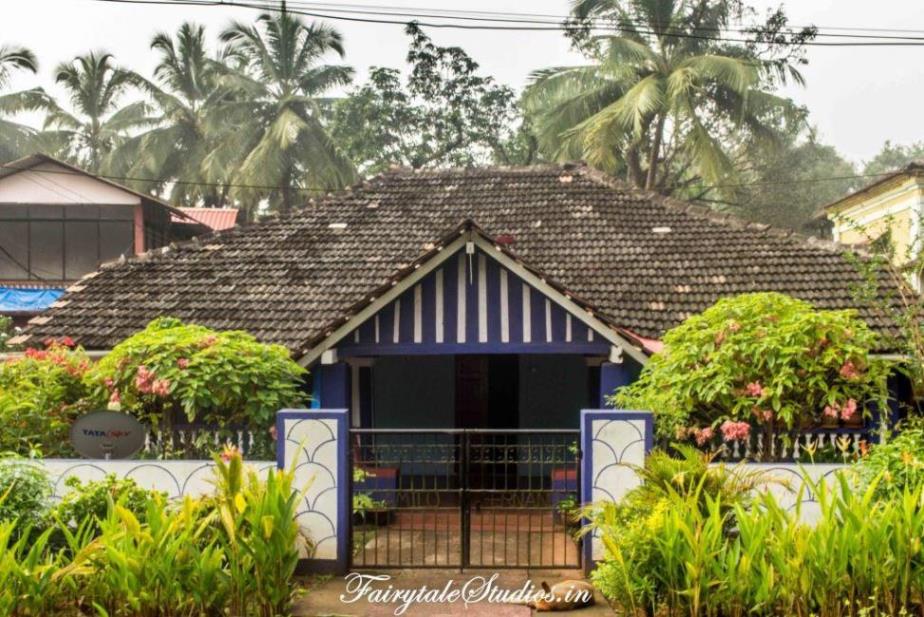 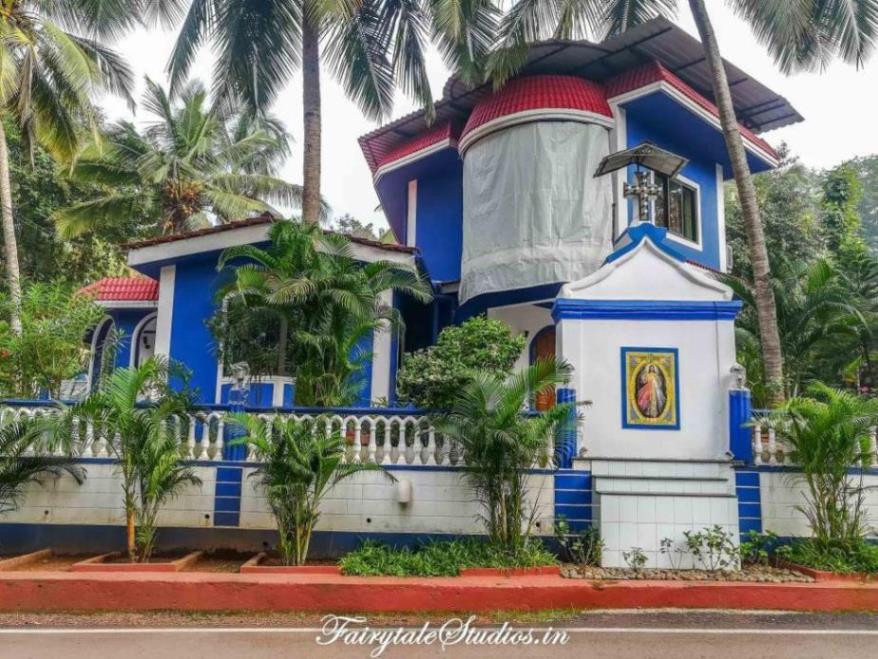 A walk in the narrow lanes of the island is picturesque and takes one back to the bygone colonial era. The villages are scenic with hills entwining the roadways. One can also find ample bird watching opportunities on the island. It doesn't take much time to walk or drive throughout the length and breadth of the island. The island has some of the most beautiful and Instagrammable sites to see. Divar Island gave us the true feeling of 'susegad'.

6. Visit Old Goa churches near Divar Island If you have some more time in Divar Island, you can hop on a ferry to the Old Goan mainland from Piedade terminal and visit the famous churches there. The Basilica of Bom Jesus, Church of St. Francis of Assisi, Se Cathedral, Church of Our Lady of the Mount are just a 5-10 minute ferry ride away. Our favourite was the Church of Our Lady of the Mount which is located on a hilltop. We got a spectacular panoramic view of the Divar Island and Mandovi river from atop. The Church is covered in greenery and there's nothing but gentle air of calmness that one could experience here. We visited this church in the evening and saw one of the most beautiful sunsets of our life.

Best time to visit Divar Island, Goa: Very few tourists visit Divar Island. Though the island can be visited throughout the year, if you wish to make your way to the island, plan your trip around the time of festivals. The two most popular festivals celebrated by Divar locals are Bonderam and Potekar. Bonderam occurs annually on the last Saturday of August when the villagers get involved in mock fights and flag parades. Live bands entertain the onlookers throughout the day. The Potekar festival is celebrated three days before the Lent in March where locals wear home painted masks, bells and costumes just like Halloween and roam about in the village demanding for food and drinks. Even monsoons are magical in Divar Island as the entire island comes alive with greenery.

Divar Island as seen from the ferry point at mainland Goa

Where to stay in Divar Island, Goa: In Divar Island, travellers can choose to stay in one of the many quaint home stays (read charming Portuguese villas) and BnB options like Island house goa or Moradia dos Quadros. There is also a nature cure retreat and spa named The Devaya Resort for those looking for more luxury.

We highly recommend spending a night or two at Divar Island to soak in the essence of its simple living and susegad way of life. If you are someone who is looking to enjoy a day or two away from Goa's hustle and bustle, then Divar Island is the place for you.

Best Travel Magazines in India & why you should still read them

Register for our live blogging course

Responsible Tourism - How to travel responsibly

Places to visit in Murudeshwar - A Travel guide

Top 15 places to visit in Diu

Note - All photos shared here are of lower quality to enable faster loading. If you would like to buy/license any of the photographs you can drop us an Email. This page might contain affiliate / paid ads which helps in running this website.